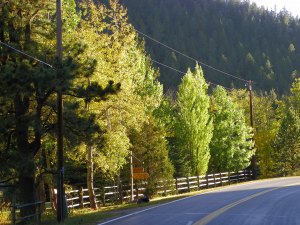 Good morning.  Suzie and I took her dad Ray Nuetzman back to Nebraska last week for a 40th celebration.  Ray is a retired Methodist Church Pastor, and while serving in Seward Nebraska he spent several years building a new church.  The congregation from Seward invited Ray back to preach on the 40th anniversary of the opening of the church.  He belted out an amazing sermon to a full house.  There were so many people in attendance that they had to set chairs up in the vestibule.  It was a wonderful trip and they treated Ray like a “King” while we were there.

The trip to Nebraska was wonderful.  The feeling of coming back to Estes Park and being serenely held by the mountains surrounding you with their comfort and beauty reminds me why we live here.  I won’t bore all of you with the Nebraska trip, but if you would like a narrative and some pictures send me an e-mail and I’ll send it to you.

The elk are in full rut, and maybe next week I will have some good pictures of the elk for you.  Simultaneous with the rut this year come the changing of the Aspens.  I took a couple of shots while over at Glen Haven on Saturday.  The bad news is by the time I got over there the general store was closed, and no cinnamon rolls for Suzie.  Have a terrific week.